Skip to content
back to home back to Speaker overview 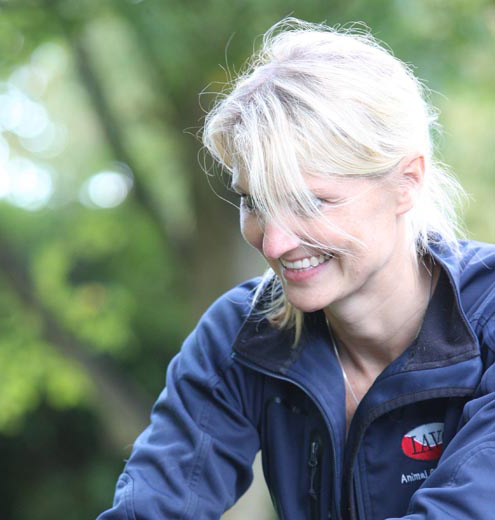 Winnie Dreschel graduated from the Faculty of Veterinary Medicine, University of Leipzig, Germany, in 2000.

After some months practical trainee time at the University of Nairobi and the Kenya Wildlife Service and some traveling throughout Africa, she started in 2000 as a veterinary assistant in a small clinic in Saxony, Germany.

From 2002 until 2010 she worked at the Veterinary Clinic in Schwerin, Mecklenburg-Vorpommern, where she completed her specialisation in Equine Medicine in 2007 successfully. There she worked as a veterinary surgeon with both horses and small animals.

2013 she successfully completed the exam as a Chiropractic Specialist in Vienna, Austria.

From 2011 – 2015 she was exclusively practicing Chiropractic and Acupuncture in the Veterinary Practice Dres. Moffatt in Germany and became a lecturer at the International Academy of Veterinary Chiropractic.

2016 she established her own Practice “Veterinary Chiropractic & Acupuncture – Winnie Dreschel” in Mecklenburg-Vorpommern, Germany and worked also in Somerset, England until 2020.

She continues lecturing at the International Academy of Veterinary Chiropractic (IAVC).

since 2016
establishing of „Veterinary Chiropractic & Acupuncture – Winnie Dreschel” in Mecklenburg-Vorpommern, Germany (and Somerset, England until 2020)

2013
Certification as Veterinary Acupuncturist (GERVAS, IVAS)
Board Certified Specialist in Veterinary Chiropractic (A)

Since 2011
Lecturer at the IAVC – International Academy of Veterinary Chiropractic

back to Speaker overview

We use cookies on our academy website to give you the most relevant experience by remembering your preferences and repeat visits.

By clicking “Accept All”, you consent to the use of all the cookies. However, you may visit "Individual Settings" to provide a controlled consent.

This website uses cookies to improve your experience while you navigate through the website. Out of these, the cookies that are categorized as necessary are stored on your browser as they are essential for the working of basic functionalities of the website. We also use third-party cookies that help us analyze and understand how you use this website. These cookies will be stored in your browser only with your consent. You also have the option to opt-out of these cookies. But opting out of some of these cookies may affect your browsing experience.
Necessary Always Enabled
Necessary cookies are absolutely essential for the website to function properly. These cookies ensure basic functionalities and security features of the website, anonymously.
Functional
Functional cookies help to perform certain functionalities like sharing the content of the website on social media platforms, collect feedbacks, and other third-party features.
Performance
Performance cookies are used to understand and analyze the key performance indexes of the website which helps in delivering a better user experience for the visitors.
Analytics
Analytical cookies are used to understand how visitors interact with the website. These cookies help provide information on metrics the number of visitors, bounce rate, traffic source, etc.
Advertisement
Advertisement cookies are used to provide visitors with relevant ads and marketing campaigns. These cookies track visitors across websites and collect information to provide customized ads.
Others
Other uncategorized cookies are those that are being analyzed and have not been classified into a category as yet.
SAVE & ACCEPT